I started the day off correcting the URL on my cards. I thought about gratitude. How, I wondered, could I be grateful for making such a stupid mistake? I suppose it’s a lesson in humility. And at least I know about it now and can take steps to remedy the problem. But still. I had one job. . . .

I checked out of the hotel at 7:15. One problem: breakfast didn’t start until 8:00. I wasn’t going to sit in the lobby for 45 minutes, so I went outside and sat on a bench and ate some almonds and dried fruit. It wasn’t enough for a morning of walking, but I was hoping I’d come across a place where I could get something more substantial. And I did: a restaurant called Eggsmart (a chain in southern Ontario) where I ate a second breakfast, a four-egg omelette. Walkers, like hobbits, like to eat two breakfasts. In fact, I wouldn’t be surprised if Tolkien was a walker, strolling on the footpaths around Oxford when he wasn’t drinking beer and arguing with his cronies in the Eagle and Child. That’s where he came up with the idea of creatures going on what is essentially a long walk. At least, that’s my theory. 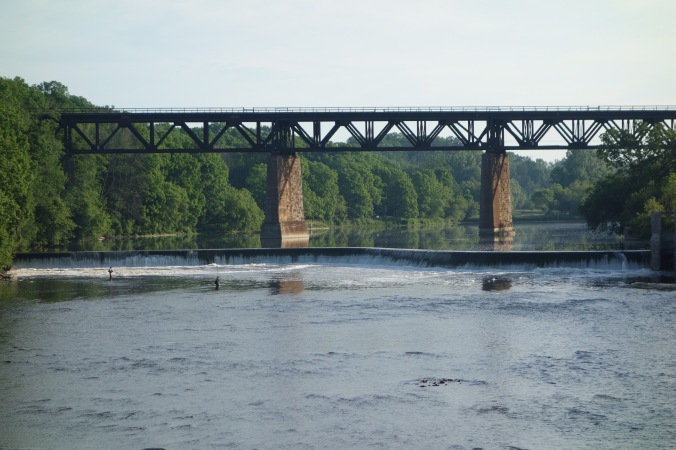 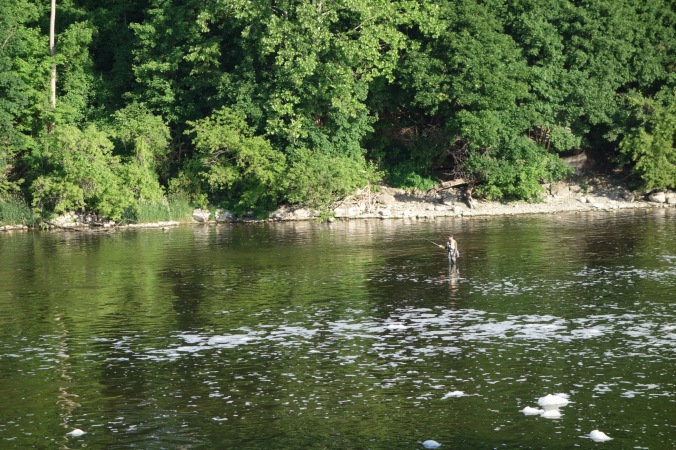 When I crossed the river I noticed many anglers, including a few fly fishers, which suggested that there are trout in the river. A riverside plaque told me that there are more than 80 species of fish in the Grand, and 23 species of freshwater mussels, including many species-at-risk. In fact, the Grand River is supposed to be home to more species of fish than any other river in Canada. I was amazed. When settlers arrived, they started treating the river like a toilet. How did all those species manage to survive? It sounds like the river has recovered, or at least partially recovered, from that.

As a freight train rumbled overhead, I noticed a street sign: Mick Jones Way. Paris might remember Joseph Brant, but it also apparently reveres the Clash, too. 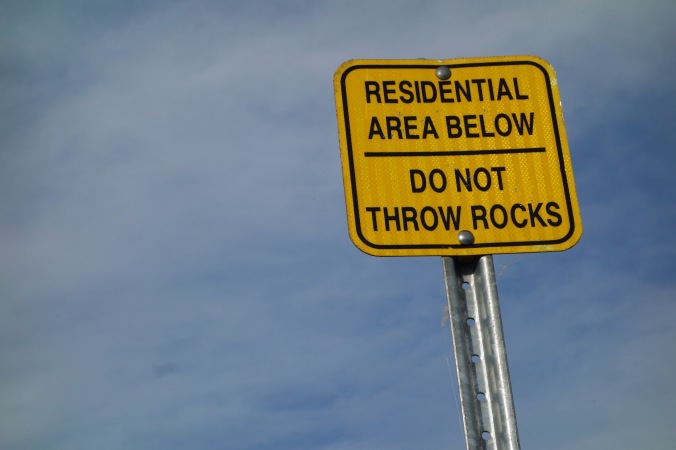 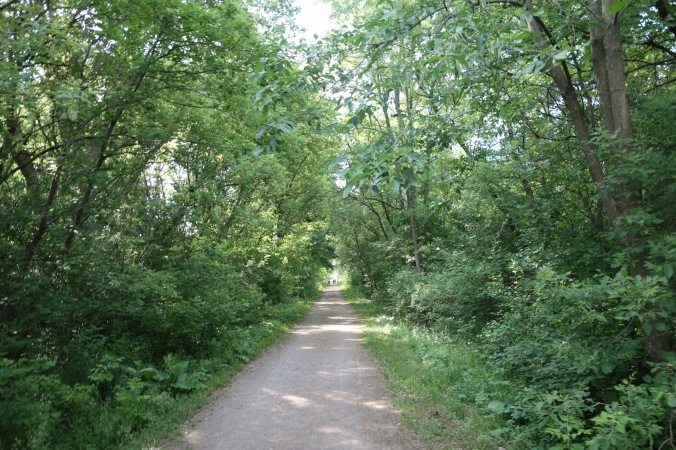 I hiked back to where I’d left the rail trail the day before. I walked until I caught up with three friends who were walking a dog named Baggins. They walk the same stretch of the trail every day, in every season. They told me about the animals they’ve seen: coyotes, deer, rabbits, skunks. “Watch out for racoons,” they told me. Raccoon rabies has reached this part of Ontario. “Especially racoons that seem to be friendly,” they continued. “They’re likely to be rabid.”

We walked together as far as the lot where they’d left their cars. I asked about the fishers. “Oh yes,” they said, “there are all kinds of fish in the river, and people come from as far away as Oakville to try to catch them.” I asked about the fly fishers. Does their presence on (or in) the river mean that there are trout? Yes. Why didn’t the couple I saw in Cambridge eat what they caught? Are the fish not good to eat? “I’ve been eating fish out of this river all my life,” Albert (the fellow in the middle) told me. “There’s nothing wrong with them.”

So maybe things can change for the better. Maybe ecosystems can recover from decades of abuse. And maybe the same is true of relationships between groups of people, too. Maybe reconciliation is possible. I said goodbye and carried on down the trail, thinking about how that might happen. 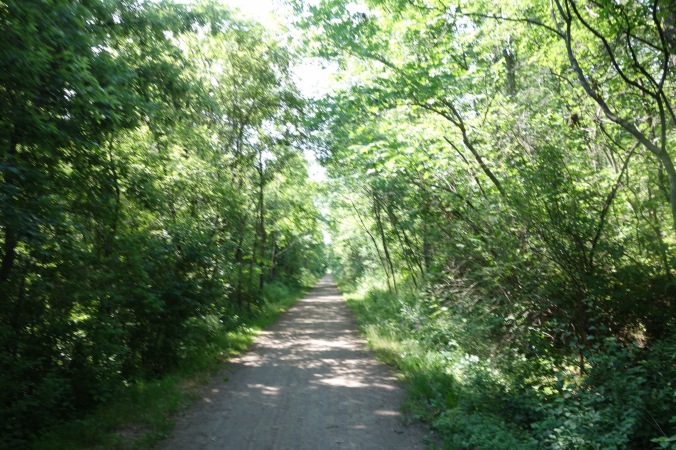 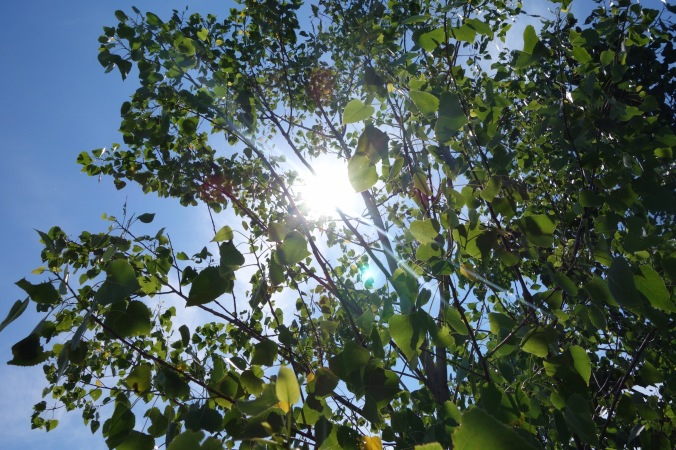 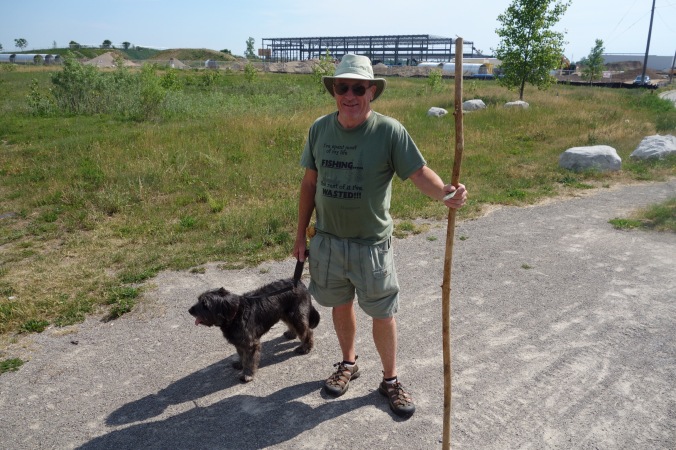 I crossed Highway 403 on a pedestrian bridge. It was getting hot and I was beyond the forested part of the path. Just as the rail trail ended at an industrial park on the outskirts of Brantford, I met another fellow who was taking his dog for a walk–or rather, a swim in the river. I asked him where we were and he showed me on my map. His t-shirt said “I’ve spent most of my life fishing–the rest of it I’ve wasted,” so I figured he would be someone to ask about the river. “You’d be surprised what’s in there,” he said. “Salmon, rainbow trout–fish that need clean water.” They’ve come back because the river is less polluted than it was? “They were always there,” he answered. “There are just more of them now.” And why don’t people eat them? Much of the river is legally reserved for catch-and-release fishing with barbless hooks, he told me. So you could eat them; you’re just not supposed to. 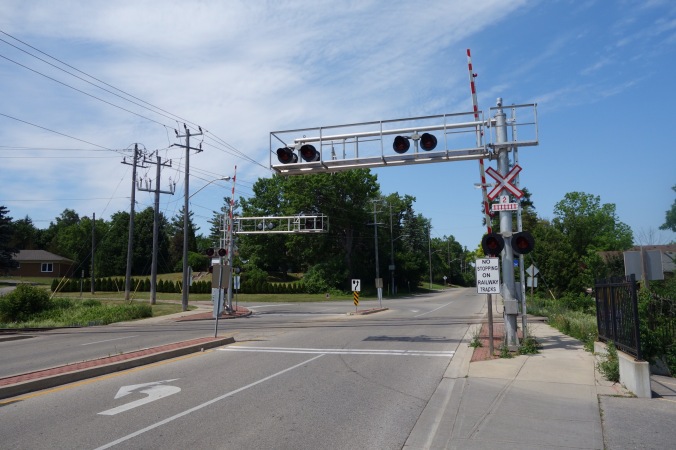 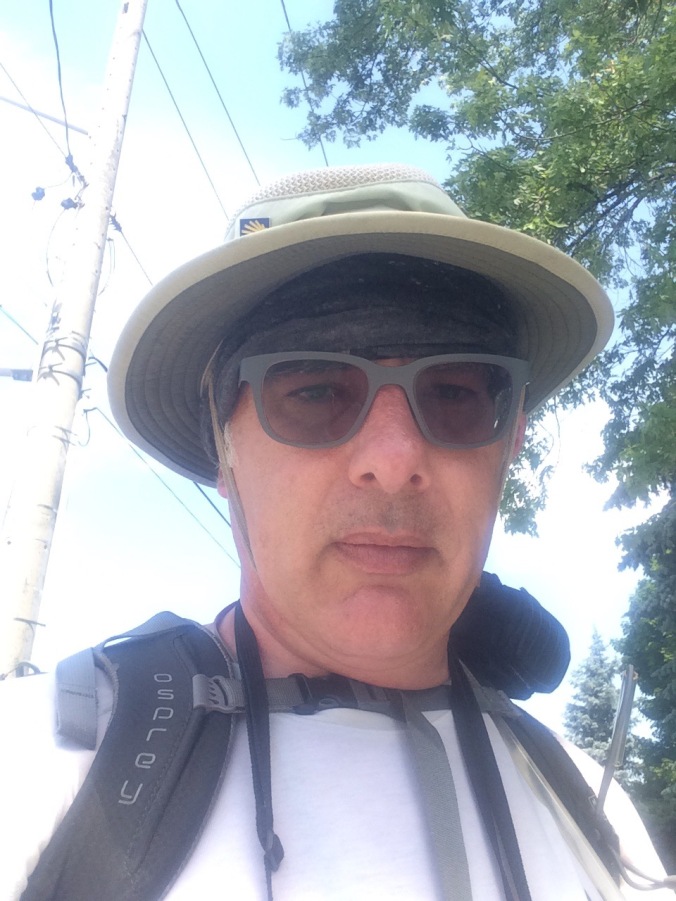 It was a long walk through the industrial park and up Hardy Road. And it was brutally hot. I walked past a golf course where we used to toboggan sometimes. Sweat was running into my eyes and I took my Buff off my neck and used it as a sweatband. A little sunburn is one thing, but I need to be able to see where I’m going. Even that slog had its bright points, though: in a tree stripped bare by tent caterpillars I saw a female cardinal.

I have to be honest, though. Even the long, hot, difficult walks when my feet hurt and I’m tired–even they’re pretty good. And not in an “it feels good when I stop” kind of way. It’s hard to explain. You’d have to experience it. 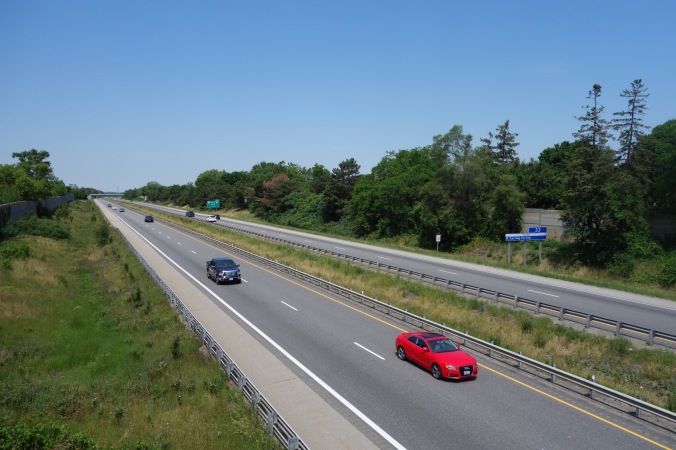 Hardy Road turned into Tollgate which turned into Fairview Drive: a straight road with little shade. I cross the highway again I stopped to see my Uncle Lorne and Aunt Lois. They weren’t home. I stopped at the Farmer’s Dell, a convenience store I used to go to when I was a kid, and bought a popsicle. Finally I reached my mother’s place. It was cool inside. I’d only walked 19 kilometres, but it felt like a lot more. And the walk between Paris and the outskirts of Brantford had been nothing compared to the walk into the city. But it was still pretty good, to tell you the truth. If I didn’t like what I’m doing, I wouldn’t be doing it.

My friends Jamie and Dan drove down from Toronto to meet me. We drove back into Paris and had lunch at Stillwaters, just across the street from the hotel where I’d started walking this morning. Good food, good company. Next time I’m in Toronto I’m going to stay a few days and spend time with friends. Life’s too short not to.

Remember the Woodland Cultural Centre’s “Save the Evidence” campaign–the reason I’m doing this walk. You can donate online or you can send a cheque to the Woodland Cultural Centre at P.O. Box 1506, Brantford, Ontario N3T 5V6 (attention: Save the Evidence). It’s an opportunity for you to help create a museum about residential schools in the former residential school in Brantford. It’s an important project, and one that needs your support.

6 thoughts on “Paris to Brantford: Fish and A Walk Through a Fiery Furnace”