Today was my second day off this week. I’d tried to set up meetings with different people here at Six Nations, but they all fell through (although there’s a plan to meet with elders who know about the history of the Haldimand Tract in Brantford when my walk is finished). I didn’t mind, though, because that gave me a true rest day with nothing to do but wander around and take a nap.

After I wrote yesterday’s blog post this morning, I ate breakfast at a diner just down the street. For a change I ate a fruit salad instead of eggs and bacon. That made me feel virtuous. Then I walked six kilometres or so to Chiefswood, the  childhood home of the poet and performer Pauline Johnson. I’d never been there even though I grew up not that far away. A young woman named Kari (she just finished a degree in history at McMaster and is planning to go back for a second degree in Indigenous Studies) took me on a tour of the house. Johnson is an interesting figure. Her father, George Johnson, was a Mohawk chief and her mother, Emily Howells, had been born in Bristol. Apparently Pauline learned about storytelling from her Mohawk relations, especially her grandfather, John Smoke Johnson, who told his grandchildren stories in Mohawk, a language Pauline only partially understood. However, she wasn’t all that interested in her father’s culture and thought that her Indigenous heritage was only good as a way to market herself. The Mohawk name she adopted, Tekahionwake, reflects this division: it literally means “double wampum” or “double life” (depending on which internet source you consult). Unlike her brothers, Johnson escaped having to go to the Mohawk Institute; instead she was mostly educated at home, although she did attend the same high school I did, Brantford Collegiate Institute. Surprisingly, B.C.I. doesn’t make a big deal out of its famous graduate. 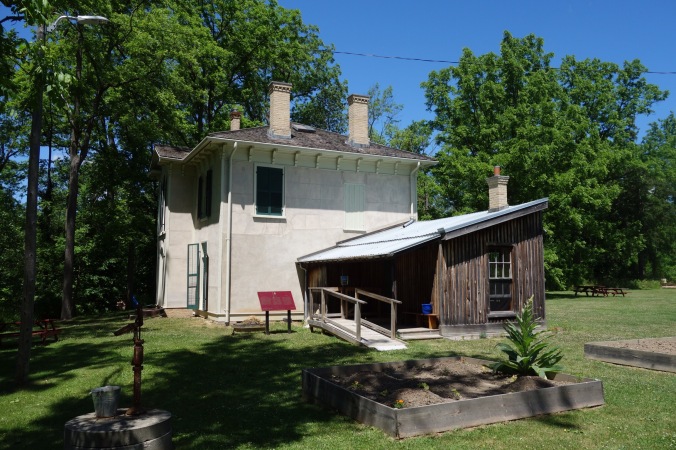 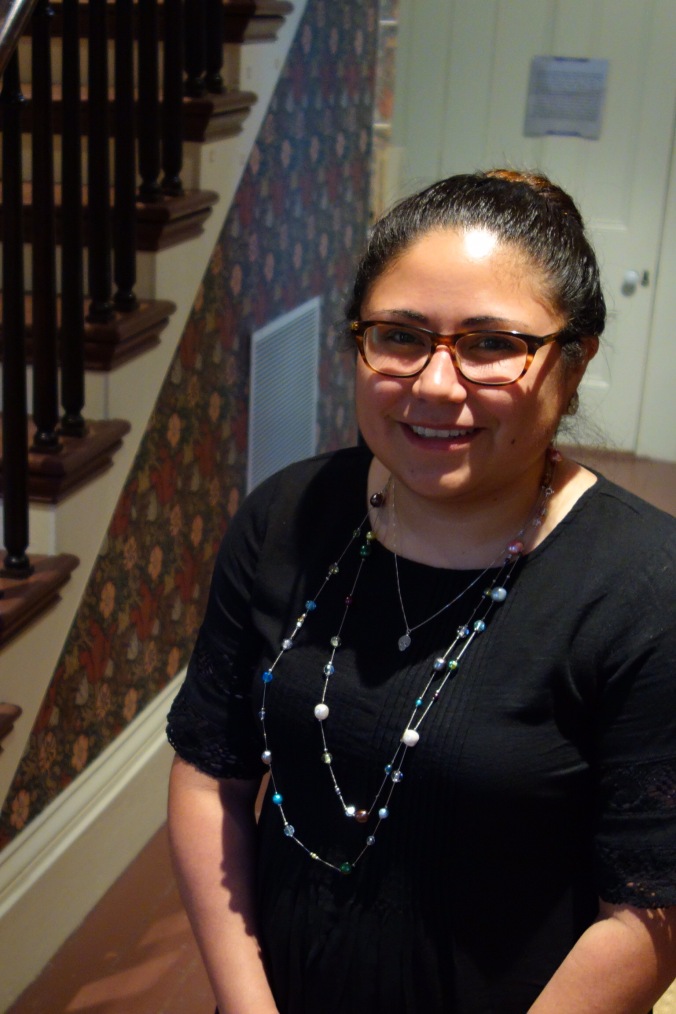 The house itself was built in the 1850s by George as a wedding present for Emily, and it’s a fascinating place. It has two front doors: one faces the river and the reserve, and the other faces the road and the world outside the reserve. Many distinguished guests visited the home, including Lord Dufferin, the Governor General of Canada; Homer Watson, the painter (I walked past his home in Kitchener); the Marquess of Lorne, another Governor General; and the inventor Alexander Graham Bell. According to the Dictionary of Canadian Biography, Pauline developed elegant manners and an aristocratic air growing up in such surroundings. 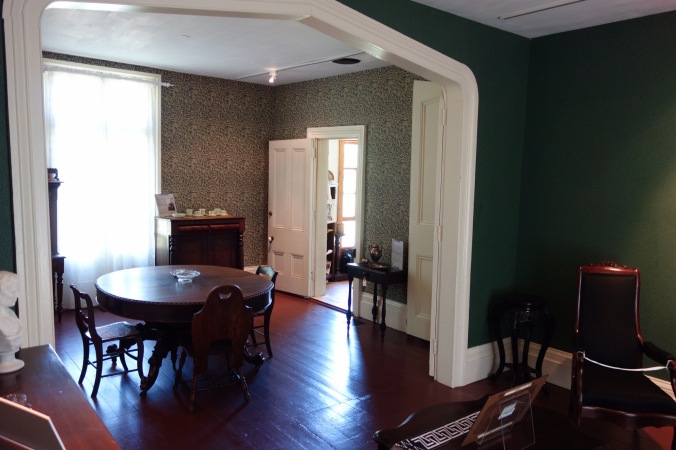 And yet there seems to have been an unhappiness in the home, perhaps related to the Mohawk Institute. Johnson’s brothers died young (one was apparently an opium addict) and none of George’s children had families of their own. Of course, with Johnson’s difficult international touring schedule, it would’ve been almost impossible for her to settle down and become a proper Victorian mother. And she had to perform: she needed the money she earned from touring, and she was on the road constantly. During the first half of those performances, she would wear European clothing; in the second half, she would wear buckskin–another suggestion of a divided consciousness, perhaps. She died of breast cancer in Vancouver in 1913. When the last remaining family member, Johnson’s sister, Eliza, died in the 1930s, the house was left to the Six Nations. In the 1970s it became a museum. Many of the furnishings inside belonged to the Johnson family, including a table topped with porcupine-quill work. I didn’t know much about Johnson before my tour today, but I’m inspired to read her work after visiting Chiefswood. 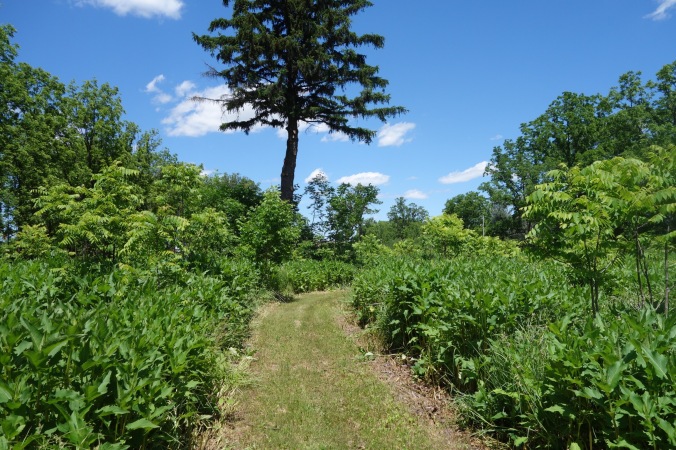 I sat under the big maples outside for a while and walked through a tall-grass prairie restoration project. Then I headed back into the village and had lunch at a place that serves salads and smoothies. Back at The Bear’s Inn, I talked to the owner, Lisa. She was raised by her grandmother, a survivor of an Indian boarding school in the United States, and she told me about how much her grandmother had been damaged by the experience. She had learned to be ashamed of who she was, and she passed that on to the children in her care. Later in life she became more interested in being Oneida, but it took years to shake that school’s legacy. 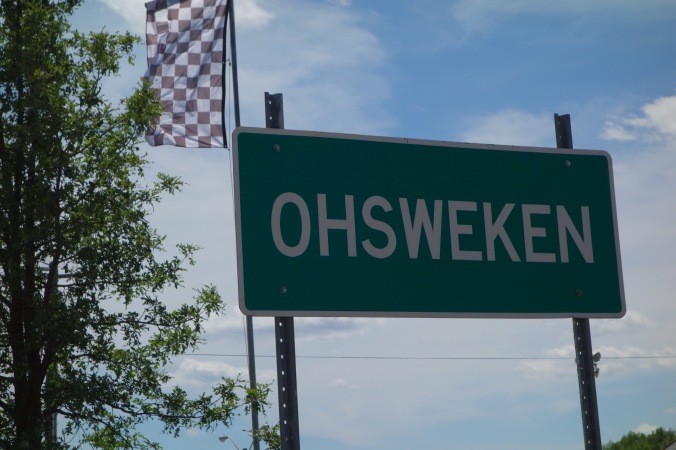 That story is yet another reason to support the “Save the Evidence” campaign, to make sure that nobody forgets what was done in institutions like the Mohawk Institute. You can donate online here or send a cheque to the Woodland Cultural Centre, P.O. Box 1506, Brantford, Ontario N3T 5V6 (attention Save the Evidence). 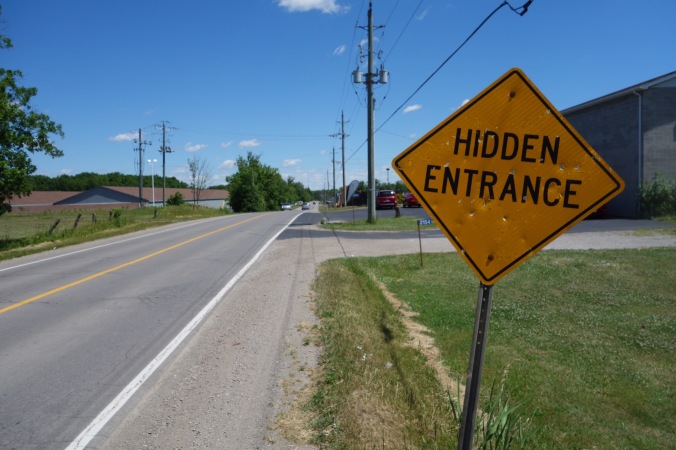 Lisa told me that even though the reserve has a bigger population than surrounding towns, its economy has lagged behind because for years banks wouldn’t make loans to businesses at Six Nations. That’s changed, now, and two chartered banks have branches in Ohsweken. I suppose I can’t avoid mentioning that one of the biggest economic drivers here is the smoke shacks that line the roads. First Nations people are exempt from paying tobacco taxes in Ontario, and visitors to the reserve who pay cash can pay the same low price for cigarettes. You build an economy on whatever advantages you can, I guess. But one side effect of cheap tobacco is the number of smokers on the reserve. My friend Tom says there are a lot of wealthy people at Six Nations, and I did walk by some mansions today, but statistically incomes are lower than in the rest of Brant County, and unemployment is higher. Of course, health problems like smoking are correlated with low incomes. It goes without saying that the Haudenosaunee aren’t the only people who smoke. Still, I remember the faith keeper I talked to in December telling me that tobacco lost its sacredness when Europeans took it back across the ocean. Maybe that’s true. Something that was part of a spiritual practice has become an addiction. 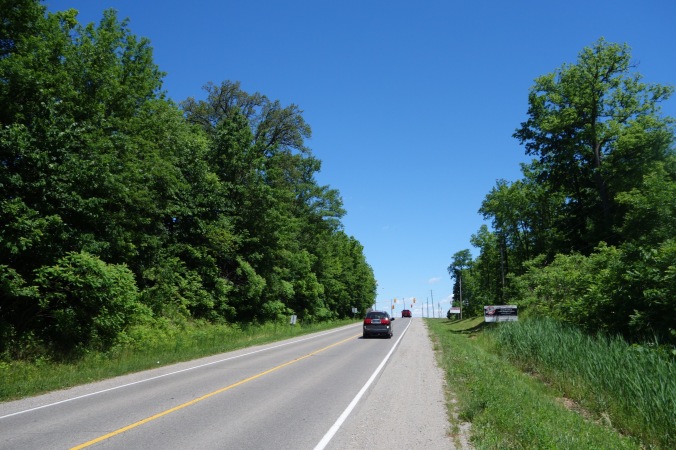 Lisa suggested that I walk to Caledonia through the reserve instead of down Highway 54. It’s a more direct route and it’ll let me avoid the traffic on Chiefswood Road. It’ll also take me past Kanonhstaton, or Douglas Creek Estates, the housing development on disputed land that was occupied by people from Six Nations back in 2006. When you make people wait a century and a half for justice, sometimes the frustration boils over. I was hoping to see Kanonhstaton while I was in Caledonia, so I’m willing to risk angry reserve dogs in order to take a look. I did throw a Milk Bone to a timid Jack Russell this afternoon, just to add to my canine karma. Lisa also told me that people from outside Six Nations dump unwanted pets on the reserve. Who would do such a thing? Do we always have to act as if we have no relations?

Maybe I’ll get by the dogs unscathed. I’ll let you know tomorrow. If you’d like to run the gauntlet with me, e-mail me through the address on the “About” page or comment on this post and we can arrange to meet up.

One thought on “Ohsweken: A Day of Rest”