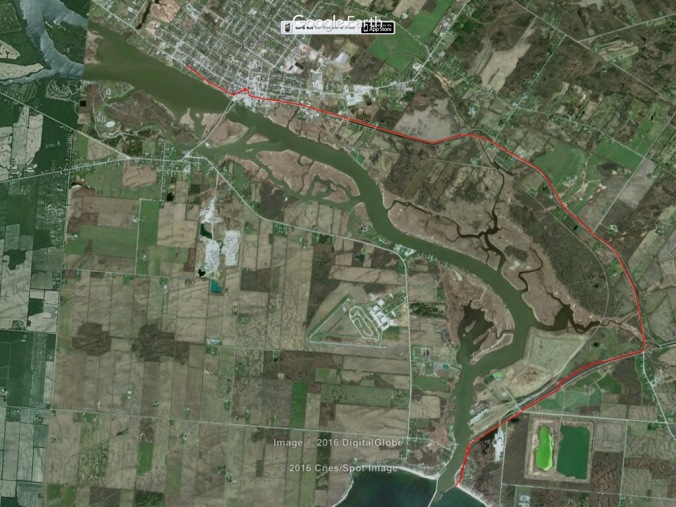 I didn’t think I was going to get any breakfast this morning. Nothing in Dunnville seemed to be open early on a Sunday. I detoured through the centre of town, hoping to find something. And I did: a diner, serving the usual diner breakfast (bacon and eggs, toast, coffee). Quite a surprise.

Already the air was heavy and humid. It was going to be another scorcher. The server shut the diner’s front door and turned on the air conditioner. It did nothing except stir the sticky air around. I sat in my booth, eating and sweating. Then I headed off for Port Maitland.

It wasn’t a long walk, just 13 kilometres, mostly on the shoulder of the North Shore Road. That road runs beside an abandoned canal, probably a legacy of the Grand River Navigation Company, judging from the stonework visible at what used to be locks. The canal is now a wetland, filled with frogs and water lilies: a quiet place, compared to the busy road running alongside it. 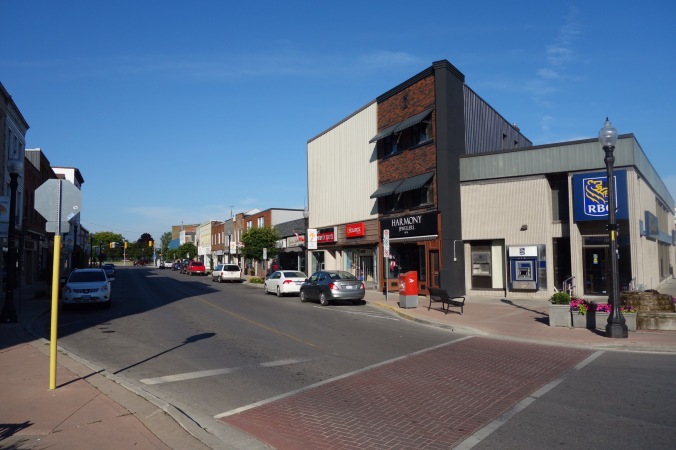 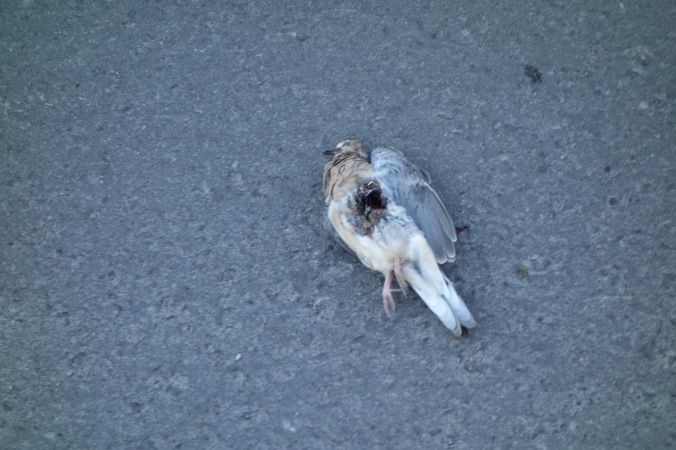 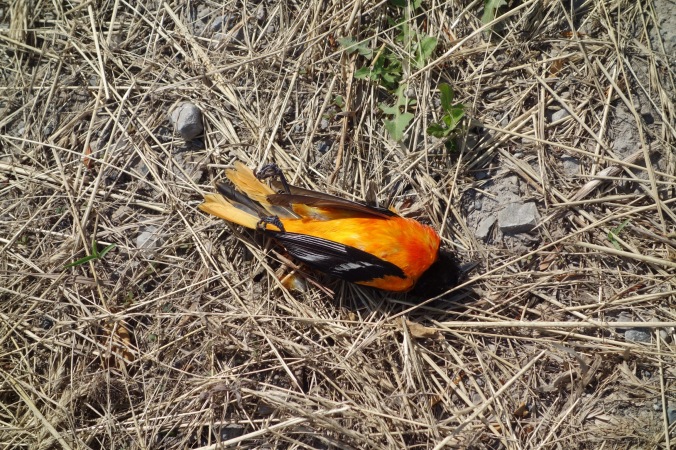 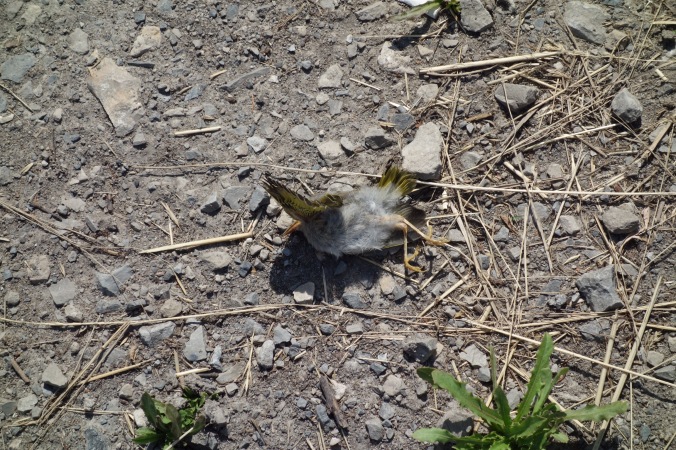 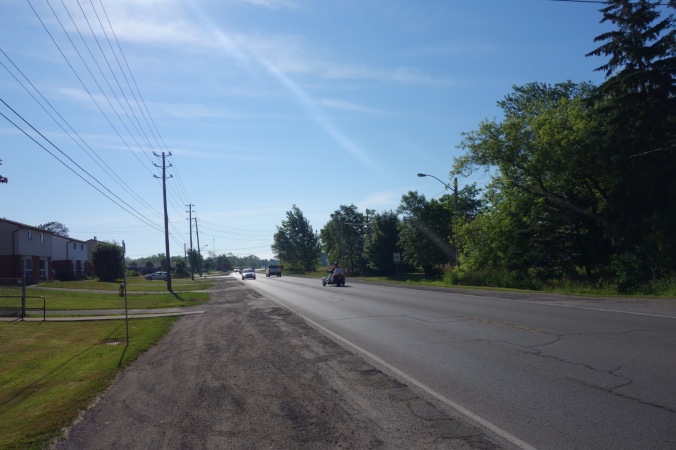 I stepped over the bodies of a dozen birds, mostly sparrows, lying on the shoulder. One was a Baltimore oriole–the second dead oriole I’ve seen on this trip. Some of my friends have complained about the photographs of roadkill on this blog, but it’s one of the things you see when you’re walking. I wonder if anyone has studied the number of animals and birds that are killed by traffic. The number must be pretty high.

My map told me when to leave the North Shore Road and I followed its advice. There were two roads to choose from, both running parallel. One was paved, the other gravel. I chose the paved one. Almost immediately it turned into a narrow, rutted track. Then it ended. Another track led to the gravel road, and it led me into Port Maitland. 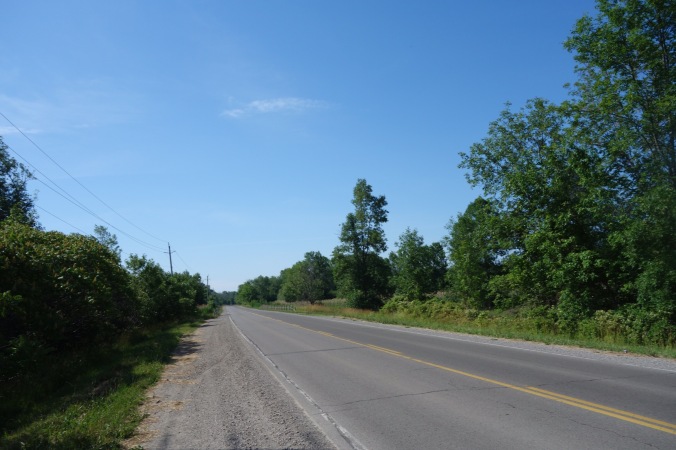 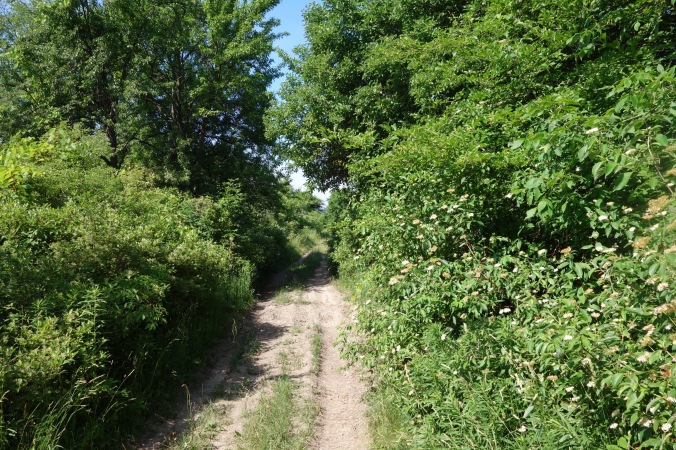 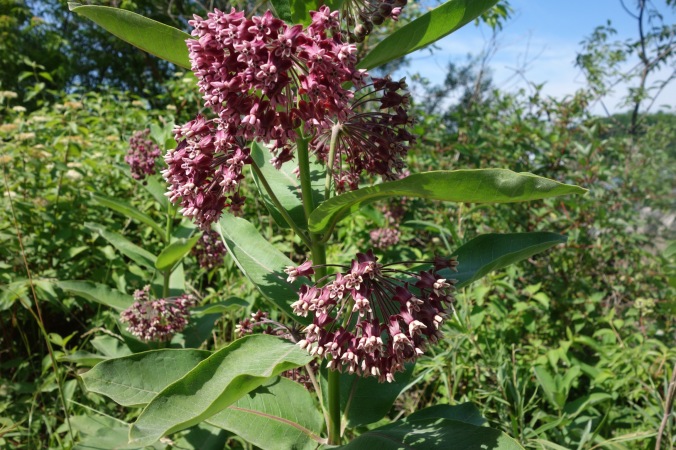 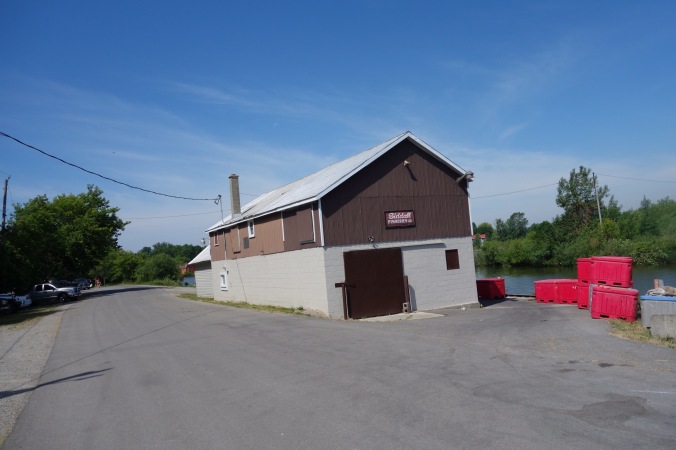 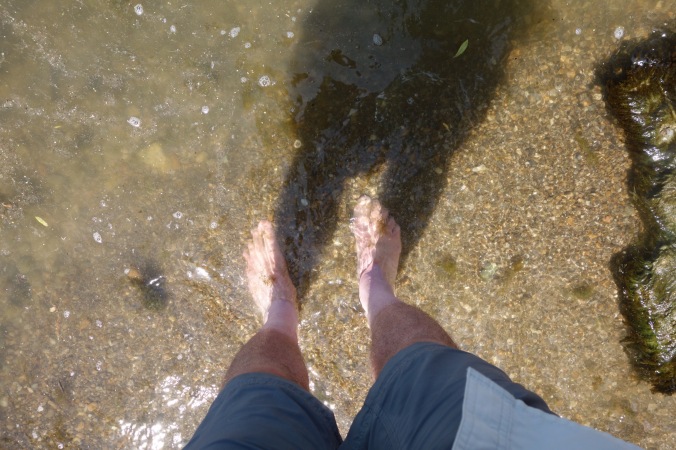 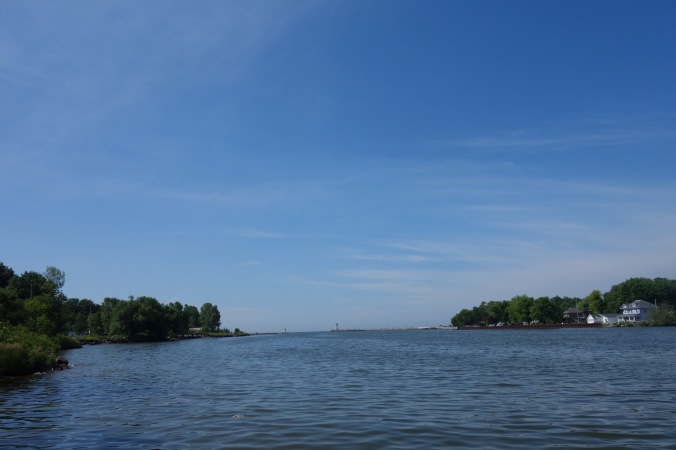 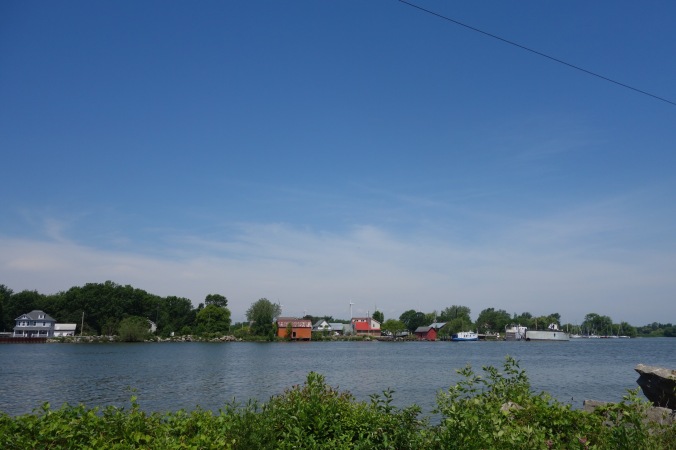 Port Maitland is surprisingly industrial. There’s a chemical factory, a freight yard, and (a reminder of home) a decommissioned fertilizer plant belonging to Mosaic, the giant potash company. The port used to be even busier, but now it’s mostly used by fishing boats and pleasure craft. I saw the  sign that marks the end of the Grand Valley Trail. I took off my boots and waded into the Grand River. It’s sluggish there and has a heavy, fishy, fecal, smell. I put my boots back on and walked through a cottage development to a sandy beach on Lake Erie. I took off my boots again and rinsed my feet in the lake. I’ll bet it’s been a long time since anybody went to Lake Erie to get clean. Poor Lake Erie: it’s too shallow to handle the vast amounts of waste we dump into it every day. 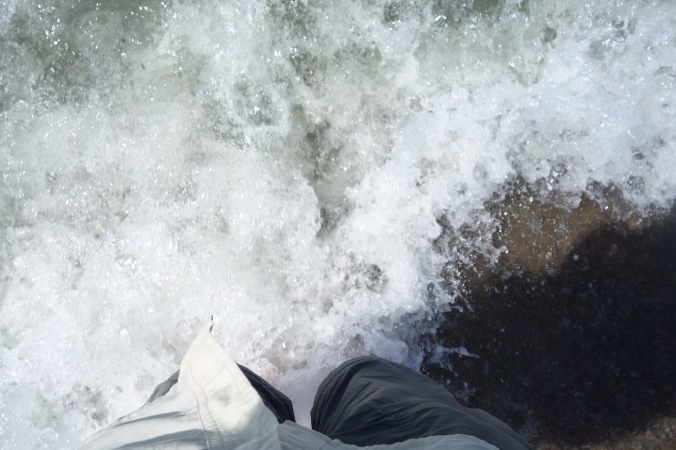 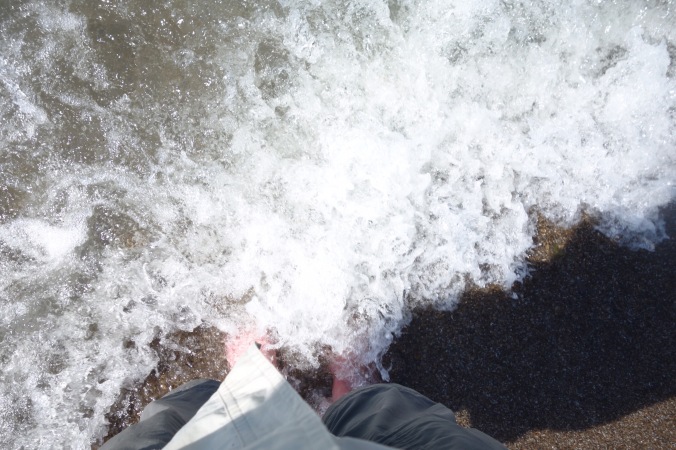 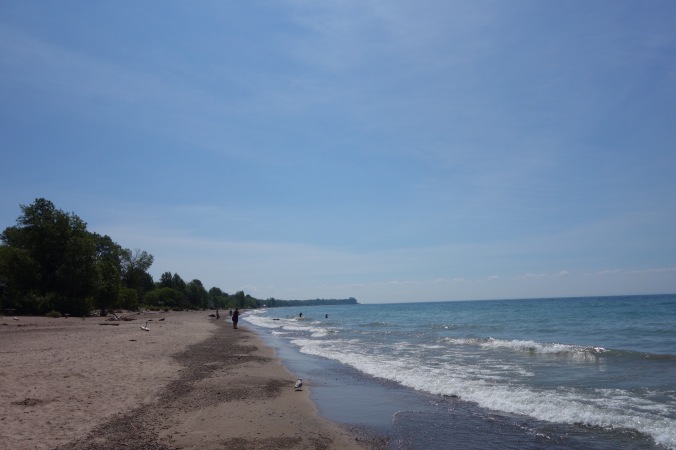 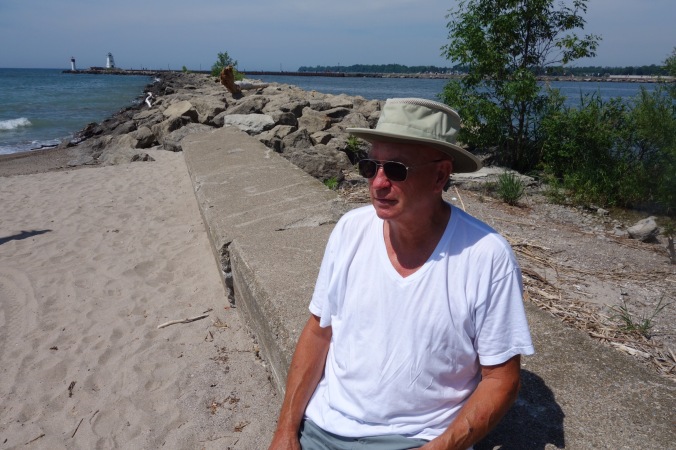 The cottage development is jealous of its privacy and I half expected somebody to tell me to move along, but nobody did. I sat on the edge of the breakwater. A fellow wearing a Tilley hat came over to say hello. He lives in the development year round. In the fall, he sees deer and fox through his windows. It’s not easy, though, being so close to the shore during winter storms, and it’s quite isolated. We talked about Dunnville. He told me that Walmart almost opened a store there. It would’ve ruined the downtown. “My friend was complaining about it and I told him to call the Indians. They’d put a stop to it,” he said. “He did, and they came down and planted their flag and the Walmart people left town.” I said that was interesting, because I’d just finished walking through the Haldimand Tract and all this land used to belong to the Six Nations. “Yeah,” he said, “they say they own everything. They own the CN Tower. They own the domed stadium.” (He must’ve been referring to the Mississaugas at New Credit.) “What are we supposed to do about it now?”

I’ve been wondering the same thing. How do we pay what we owe First Nations? After all, the Haldimand Tract isn’t the only place where land was stolen. The settlers aren’t going anywhere. First Nations have legitimate claims. What’s the path forward? There has to be one. 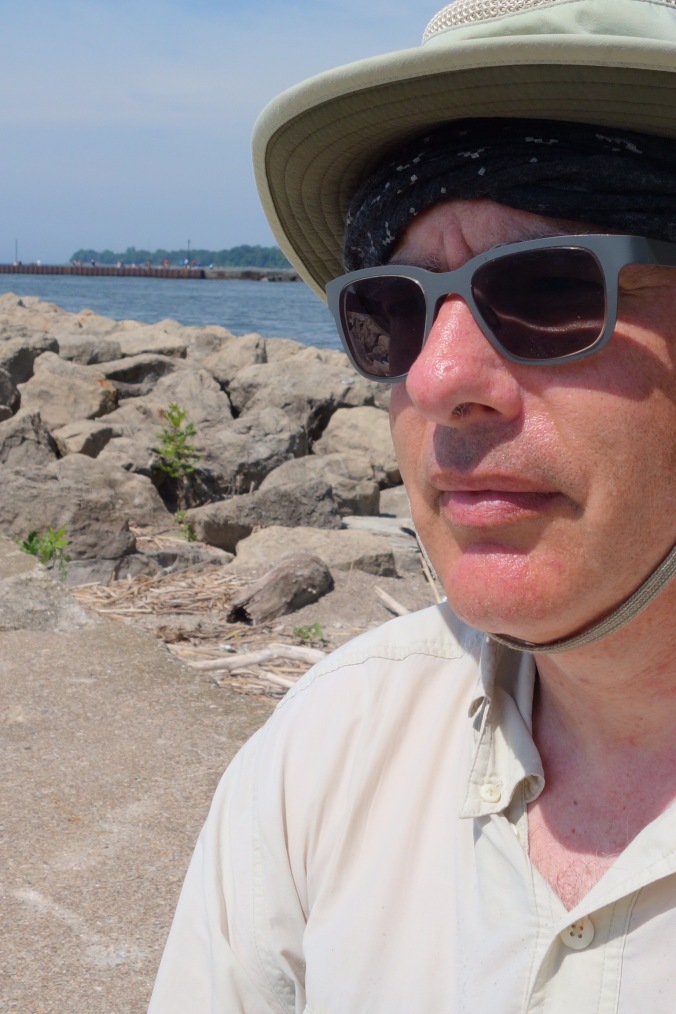 My sister, Pam, my niece, Maggie, and my grandnephew Calvin came down to pick me up and take me back to Brantford. We were supposed to meet some Mohawk elders there. My neighbour, Ed Doolittle, had suggested I contact Jan Longboat at Six Nations. If nothing else, I had to see her garden. “It’s amazing,” he told me. “Like nothing else on the reserve.”

Jan had called some people and arranged a potluck lunch. There was a traditional Mohawk statement of love, respect, and gratitude before we ate. It went on a long time. “And that’s the short version,” the speaker said. He summarized the blessing in English. It was a glimpse into Longhouse theology and it was beautiful. Then we ate. Afterwards, we went around the table, introducing ourselves. One woman is a survivor of the Mohawk Institute. She described how hard it’s been to talk about what happened in that place. Then I was asked to talk about my journey. I explained why I’d decided to make this walk–about my discovery of the history of the Haldimand Tract, my shame at what I learned, and my decision to walk to support the Save the Evidence campaign–and told a few stories of mishaps I’d had along the way: the skunk, the pit bull, the portapotty, the leaky water bag. “Thank you for caring about this history,” one said to me. “Thank you for making this walk.” It’s only a gesture, I replied, a gesture towards reconciliation. And besides, I’m not the only one who cares about the wrongs done in the Haldimand Tract and at the Mohawk Institute. Many settlers have acknowledged that the land in the Haldimand Tract was stolen. And many have made gifts in support of Save the Evidence.

If you’re one of those people, please accept my heartfelt thanks. And if you haven’t donated to Save the Evidence, there’s still time. You can donate online here or you can mail a cheque to the Woodland Cultural Centre, P.O. Box 1506, Brantford, Ontario N3T 5V6 (attention Save the Evidence). Your gift will make you a part of an important project: creating a museum or interpretive centre about residential schools in a former residential school. It’s a way you can make a gesture towards reconciliation, too. We can’t be allowed to forget the genocide that happened in such institutions. This project is a way to keep us from forgetting. 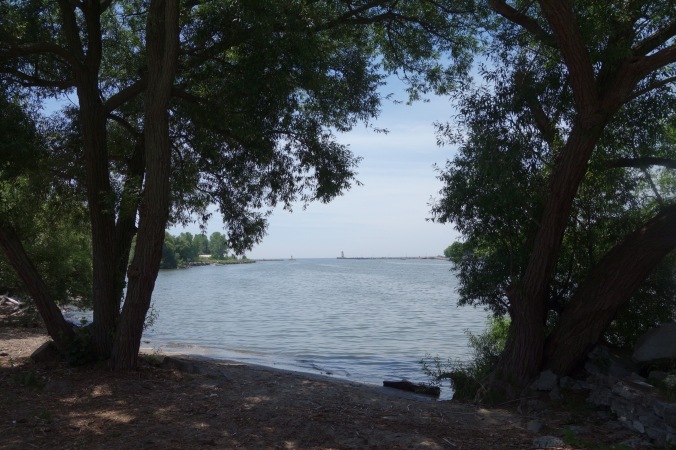 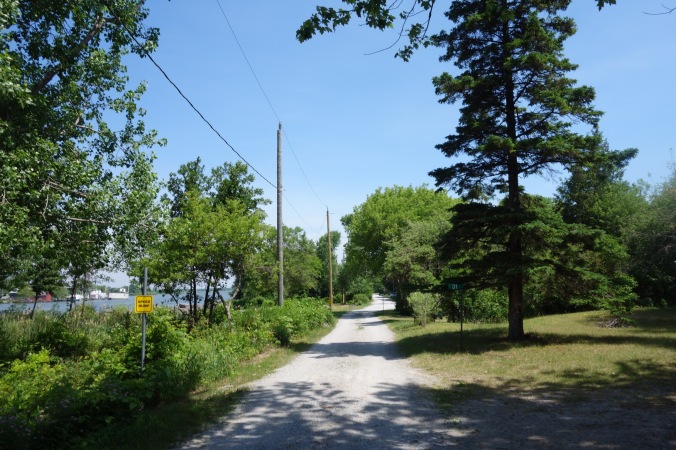 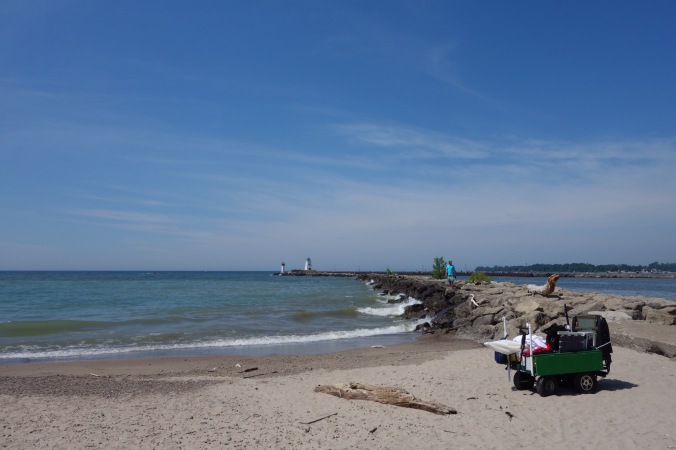 One of the people there was Bill Squire, a member of the Mohawk Workers. He handed me a thick envelope of material on the history of the Haldimand Tract and explained his perspective on what’s happened here and what we can do to make it right. The place where we were meeting used to be a museum about Six Nations history called “Kanata.” It’s also on the site of what used to be the Mohawk Village. Bill’s ancestors lived there–he’s traced them–and he is adamant that the land still belongs to the Mohawks. “We never sold it,” he said. Rather, it was taken during the purported general surrender of 1841, along with whatever remained of the Six Nations land in the Haldimand Tract outside of the current reserve. I said that settlers missed a tremendous opportunity by not meeting the Haudenosaunee as equals in the Haldimand Tract–an opportunity to learn from each other, to build something together. “It’s not too late,” Bill replied. And he’s right.

But first Canada has to acknowledge that it has a treaty with the Haudenosaunee–or, as I should have been calling them throughout this blog, the the Onkwehonwe (a word that translates as “original people”). Haudenosaunee is a political term, I think, referring to the Six Nations Confederacy; Onkwehonwe, on the other hand, is a term of identity. And that treaty is, of course, the Haldimand Proclamation. What could that document possibly be if it’s not a treaty? That recognition would be a good first step. Then, somehow, we need to address the mess our ancestors left for us when they stole most of the land in the Haldimand Tract. Reconciliation won’t mean very much if it doesn’t address the question of land: it’ll only be breath, empty words. Paying our debt isn’t going to be easy, but I think we could do it the same way I accomplished this walk: one step at a time. 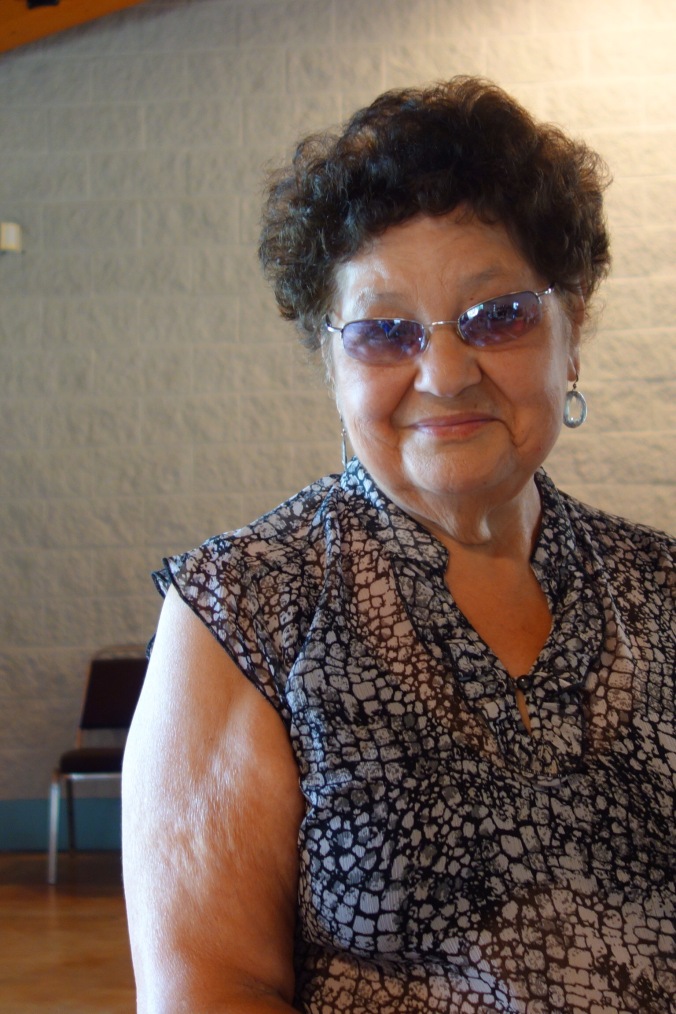 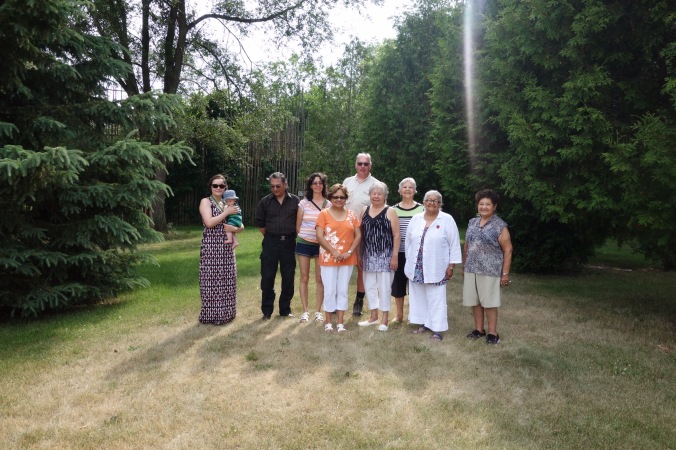 I can’t tell you how honoured I felt to have my walk end this way–how moved I was that these people would come to hear about my experience. I never expected anything like it. They gave me gifts: sweetgrass, books, a beaded zipper toggle bearing the flag of the Haudenosaunee Confederacy. We talked about the possiblity of people from Six Nations walking together through the Haldimand Tract. Walks like that have happened in other places. Why not here? I hope it happens; I’d like to be a part of it. I wanted to get individual portraits of everyone there. I thought that would be a way to get at how meaningful the afternoon was for me. But it was getting late and some people were ready to leave, so  I had to settle for a group shot.

My walk is over. In one way it ended this morning, when I waded into Lake Erie. But meeting those elders this afternoon tells me that my journey continues. I’ve only just begun that walk. And I don’t yet know where it’ll take me.

6 thoughts on “Dunnville to Port Maitland: The End of the Road, but Not the Journey”